Convex Finance (CVX) has been one of the best cryptocurrency performers in the last 24-hours. This was triggered by the growing number of projects that are integrating Convex and offering investors a chance to earn a passive income off their Convex tokens.

For instance, On March 16th, Rari Capital announced the launch of the Tribe Convex Pool. This pool leverages some of the latest technologies, such as Flywheel and ERC-4626 plug-ins. Thanks to these technologies, investors will be able to use their Convex Finance tokens as collateral in the Fuss protocol when borrowing.

This came just days after another protocol, Enzyme, announced that Enzyme users could now use Convex to stake their Curve Finance tokens and grow their earnings. This is a big deal as it has increased the number of investors using Convex, which could translate to higher prices in the long run.

However, it is not just the integrations driving investor interest in Convex Finance. Convex is also in a market currently on an exponential growth path. DeFi is on a growth trajectory as investors take advantage of the space’s passive income opportunities. This means projects like Convex Finance, which offers investors a chance to increase their bags without trading, will only get more popular.

Convex is particularly interesting to investors because it is a relatively new project with a relatively small market cap. This means it has the potential to give an above-average return once the market turns bullish again. 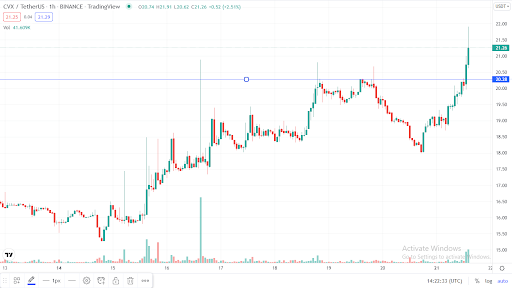 Convex Finance has been on an uptrend since March 20th, and bullish momentum is rising. Bulls are so strong that, Convex has broken through $20.26, a price level where it experienced significant resistance over the weekend. If it sustains the current momentum, then $25 would be within reach in the short term.

Convex is gaining momentum after a series of critical integrations with multiple DeFi protocols. Convex Finance is also benefiting from growing interest in DeFi, and the fact that bullish momentum is on the rise in the broader market.